I'm excited to post my interview with author, Erin Kellison. I have read her books and they are exciting and way cool... Dark fantasy with a generous dash of sexy. She uses rich descriptions to weave an original and riveting story. There's a lot of action and interesting characters. Real page turners.
I appreciate the time she took to be interviewed. Without further blah-blah here she is:

A huge thanks to Jo for inviting me to guest on her blog. I am happy to donate a copy of Shadow Bound and Shadow Fall, my summer releases, to a happy commenter, chosen at random by Jo. She sent me a list of interview questions, so I’ll just dig in…
How long have you been writing?
I started (never remotely finished) my first novel in sixth grade (a contemporary fantasy), but had attempted stories before that. When I was about twenty I took a couple courses on fiction writing and joined my first critique group, but I wasn’t really serious about writing until my first child was born about seven years ago. At first I had to juggle school and writing, but now I try to write six days a week.

What inspired you to write your first book? And what is it about?
My sister and I co-wrote a mystery-suspense, The Letter Thief. She called me up and suggested “on a whim” that we write a book together. It took us about five years from idea through final draft, and told the story of two sisters who get embroiled in a murder mystery that spans two continents and a thousand years of history. It was a blast to work with my sis on the project.

Shadow Bound is my first solo effort. It’s a paranormal romance/urban fantasy. I love both fantasy and romance, particularly in a contemporary setting, and decided to try my hand at it. Vampires and shifters are already so well-done, so I went with a banshee. Here’s the back cover blurb from Shadow Bound:
Death
Some people will do anything to avoid it. Even trade their immortal souls for endless existence.
Wraiths
Secretly, inexorably, they are infiltrating our world, sucking the essence out of unsuspecting victims with their hideous parody of a kiss.
Segue
Adam Thorne founded the Institute to study and destroy his monster of a brother, but the key to its success is held in the pale, slender hand of a woman on the run. There is something hauntingly different about Talia O’Brien, her unknowing sensuality, her uncanny way of slipping into Shadow.
Twilight
This is the place between life and what comes after - a dark forest of fantasy, filled with beauty, peril, mystery. And Talia is about to open the door. 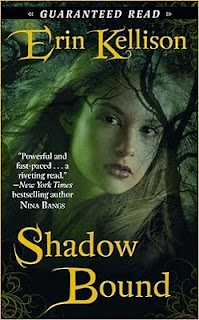 Do any of your characters embody you?
Not wholly, no. Some have aspects of me though: Talia, the heroine of Shadow Bound, comes from an academic background. She’s quiet and research-minded. I pursued academia for a while. Got my masters in Anthropology and intended to go on for a PhD. Kids and writing intervened. Annabella, the heroine of Shadow Fall, is a ballerina. I similarly took ballet for years and performed in the corps of Giselle, which is featured in that book. But her personality is very different from mine. Actually, it’s a very cool feeling to put on someone else’s head for a time and live the story through their eyes.

What was your journey like from query to publication?
As I was writing Shadow Bound, I entered the first chapters into contests frequently. Via those contests, I received requests, which led to an offer. My contract was for two books, to be released back-to-back, so I set about writing the second book. I turned in Shadow Fall about five months later. Both books were revised the following fall and spring. While they were going through copy-edits, etc, I was working on Shadowman, which sold in a three-book deal. The first two books released at the same time the third book was due, so I had quite a whirlwind for a couple months.

How much did you freak out when you held your first book in your hands?
Holding the book was surreal. Actually, each milestone has been surreal. I haven’t had a jump-up-and-down-squealing moment. Mine are more the room-tilting-as-I-go-cold variety. Even now, the printed books astonish me. I have not read one though. I tried to crack one open once, but had to quickly put it down. It seemed like it was written in a foreign language, all jumbled and strange.

Do you have a support group or are you a lone literary wolf?
I have a fantastic support group that I meet with regularly. They’re a lifeline in what is largely a lonely pursuit. Our main activity is to critique each other’s ongoing projects, but we also celebrate successes and give hugs and cookies when things aren’t going well. I love those ladies. Speaking of successes, one of my crit peeps was just named a finalist in the Romantic Times/Kensington Brava Writing with the Stars contest. There were ten finalists out of five hundred. You can check her out at http://www.kckleinbooks.com./

Any advice for aspiring authors on how to deal with rejection?
Start your next book. Be super excited about your next book.
What are your current projects?
I’ve turned in book three in my Shadow series, Shadowman, to my editor, and I’m hard at work on book four.
Where can we get our hands on your books?
My books are available in print and e-formats at book retailers and online.
Do you have any advice for other writers?
First and favorite, kill your darlings (a quote I attribute to Stephen King, but have seen it attributed to others as well). If an element doesn’t serve your story, delete it. Don’t try to make it work because you love this or that tidbit. Don’t write around it. Get rid of it. The story always comes first. This was a pitfall for me, and one I sometimes recognize in others. The minute I realize something is a darling, I have a tremendous sense of relief. I can move forward, usually by getting rid of it.
Second, in the midst of queries, rejection, promotion, networking—all the biz side of publishing—locate yourself in your stories. Your writing should be where your passion and energy reside. Write regularly, adding word count daily. It’s very easy to be distracted by the business end.

Thanks, Erin! You rock!

Check out her blog Erin Kellison.
Erin will be giving away two of her books and I have one to giveaway too. *To enter once leave an awesome comment.
*To enter 3 times comment and mention this giveaway on your blog or twitter.
Posted by Jo Schaffer at 3:31 PM

Sccchhhwweet interview! Haven't heard much of her until right now. I will check her out.

Erin's success gives bruised strugglers like myself some hope that the light at the end of the tunnel is not an on-coming freight train.

Thanks for the supportive and fun comments you made on my blog. They made my evening. Roland

Thanks for the interview, ladies! great advice to be super-excited about the next book - it really helps!

Awesome interview! I love hearing when writers get agents and book deals through contests! Congrats!

Wonderful interview, I love hearing how other author's got their start. It seems that most writers have something in common, they've always envisioned themselves writing books even as small children. Thanks for sharing you story

Wonderful interview, I love hearing how other author's got their start. It seems that most writers have something in common, they've always envisioned themselves writing books even as small children. Thanks for sharing you story

Ah, the process. They say the journey is the best part... but it sounds like getting "there" is an equally amazing experience. Thanks, Erin, for sharing. LOVE YOUR BOOKS, and can't wait till Shadowman is on bookstore shelves.